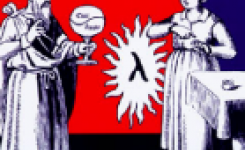 site
Yomna is a mathematics student from Waterloo who is upset that there's no overlap between graph theory and cryptography. In her free time, she sketches plants and works in her garden (with the goal of growing a giant pumpkin).
Sketchnoter for Toronto, ON

Near the bustle of Queen Street West, Bento Miso is nestled in a literal alleyway. No matter how many times I trek here for its many local indie game events, I end up lost and pestering passerby for what should surely be a brightly coloured building making muffled bleep bloop noises. But no; Bento Miso is in an alleyway. And that's okay, really. In fact, the locale matched Alterconf, a traveling video game conference celebrating diversity, perfectly. Away from the heady commercialism of everyone else, this is the place to be quietly subversive.

One way Alterconf subverted tradition was making their venue accessible. As someone who has done disability organizing in Toronto, the Bento Miso session was one of the most accessible events I've been to. The many ways Alterconf made the venue accessible to everyone included: live-captioning (courtesy of MVP @stenoknight), priority seating, mobility lanes, vegan/gluten-free/halal/nut-free food options, gender-neutral washrooms, bright lighting, wheelchair access, childcare on request, a safer space policy, a code of conduct, pay-what-you-can tickets and content warnings before every talk that needed them.

Yeah, I know. That's a lot. But that's what it means to be truly diverse. Speakers themselves reflected this. Coming from the Toronto community, their stories were a spectrum of experiences in tech and video games workplaces close to home.

“This is an event for you by you,” organizer Ashe Dryden told attendees right before the session began.

With how rare events like this pop up, it's no wonder the session sold out. If you weren't there, here's what you missed:

Omosola Odetunde
Loving Your Job And Why It (Actually) Matters

Burnout is so real. A software engineer, Odetunde's been head over heels for programming since she was a wee Computer Whiz Kid™. But there was a time in her life where she was close to becoming a statistic, another women of colour who left STEM. Her talk explored the reasons why people feel disengaged –  such as lack of self-autonomy, useful feedback and supportive relationships – and how her experience with bad internships and great behaviour science classes made her realize she didn't hate computer science after all. By reflecting on what she loved, Odetunde completed her masters and rekindled her love with tech.
What to take away: Write what makes you feel fulfilled and what doesn't about your work. And if you're not too keen on reflecting, taking a motivation quiz on Google is a low-energy way to figure out what you dig, Odetunde advised.

Christina Truong
Don't Just Talk About It, Be About It

Diversity shouldn't be just a word. Despite being a professor and a front-end developer, Truong has always felt excluded from Toronto's tech industry. She's had to put up with microaggressions, like being told she doesn't “look like a developer”.  And after giving two diversity talks, Truong felt discouraged by low turnout and being derailed. After all, just giving a tech talk would be tweet-friendly and good for her career. But when attendees later told her about how important diversity was to them, she decided to filter the noise. “Cities like Toronto lead people to be lulled into the idea that 'this doesn't happen here,'” Truong said. “Being inclusive of everyone's experiences means being aware of how different people are discriminated against in different ways.”

What to take away: Truong notes that diversity often becomes a white women in tech narrative. As well, examining our own behaviours for bias shows us ways we internalize problematic ideas.

Voswinkel laid down some real truth early in her talk: lie to your employers about your former salary. Really.  The main goal of a capitalist society is to make money and discriminatory pay is a way businesses take advantage of marginalized people. One way Voswinkel urged people to disrupt the cult of silence around salary was #talkpay, a hashtag that sparked dialogues sharing how much people made. “Open conversations about pay make it so all workers get paid what they're actually worth,” she  said.
What to take away: Linking moral value to pay is a mistake that suggests underrepresented individuals in fields just aren't working hard. As well, putting faces to names rather than collecting anonymous statistics highlights who exactly is not getting paid enough.

Gabriela Aveiro-Ojeda
Preserving Culture Through The Power Of Games

A third-year animation student hailing from Paraguay, for Gabriela Aveiro-Ojeda playing video games meant learning English through sketchy emulated CDs loading on a slow computer. It wasn't until she played Never Alone, a game about an Inuit girl that featured Alaskan Inupiak storytelling, did Aveiro-Ojeda realize video games could preserve ways of life. Never Alone reminded her of Paruguayan literature about Guarani people, that also preserved their stories, except because Never Alone was a video game it was on a whole other level of immersion and interaction. “Video games are cultural agents,” Aveiro-Ojeda said. “Culture in games should not just bring profit. They can leave behind story to pique interest in people's narratives.”

What to take away: It's important to support culture in games, and especially in developers. If there are elements of a culture in a game, but no one from that culture involved in development, it further mystifies and disempowers that people.

All the world's a stage.exe, so it's not any surprise to gitHub manager and performer Haleigh Sheehan that the worlds of open source and improv are pretty similar. Saying yes is essential to creativity and expanding life's scope, so the goal is to feel good about it so you can say it as much as possible. And how do you say yes? By saying no. Setting boundaries is key to collaboration, and Sheehan used the laws of coding to show that. Consent culture, much like circuitry, relies on active participation and not silence. “Consent is your Terms of Service,” Sheehan said.
What to take away: Maybe is a “squishy” word that doesn't clearly state your needs. If you hear someone using squishy words, they may not be running on the same operating system as yours. As well, knowing boundaries and using low-level yes and no language helps you know when to take care of yourself. Agreeing to more than you can handle leads to problems in the long run.

While watching Orange Is The New Black, illustrator and designer Leisha Riddel wanted to apologize for Piper before realizing something.

Born in the Philippines, Riddel was adopted by a Scottish/French family. Sailor Moon and Final Fantasy, with its white-passing, racially ambiguous characters, influenced and resonated with Riddel's ethnic dysphoria. In turn, that disconnect was visible in her art: she'd draw original characters who would have white appearances and backstories, but ethnic names. They were also learning experiences, ways Riddel explored identity and learned the importance of conscious design.

What to take away:  Characters with various body types and sizes and backgrounds are important. (Also Steven Universe is a really cool show.)

Unlike the other talks, educator Hinna Yusuf chose to hold a roundtable. Her research into technology use in Pakistani immigrant families led her to discovering dueling discourses: parents wanted their children to be exposed to technology, but they wanted them to be safe. They'd have consoles and cell phones, consumer lifestyle gear, but no tools of creation or development. The discourse on video games needs to change, so parents can see how skills are nurtured rather than time wasted.
What to take away: “Parents will read a book first before giving it to kids, but won't go on the Internet with them,” Yusuf said. As well, there was an interesting throwback to a previous talk on preserving culture in video games,:Yusuf's research showed that parents viewed technology as culturally neutral, rather than maintaining culture.

Kill your role models. In a let's-stop-putting-people-on-stressful-tokenizing-pedestals kind of way.

After falling ass backwards into a great career at myplanet, Ivanna McConnell realized that true diversity is only possible with an inclusive foundation. “Always being looked at can be dangerous,” McConnell said, criticizing tech companies who expect diverse employees to be role models. Forcing that kind of responsibility and attention turns the spotlight on what's different about them. Jumping straight into diversity leads to marginalization, and McConnell saw that happen to her wife – after winning a national engineering award and touring schools to inspire young women, she felt exhausted always performing.

What to take away: It's the workplace's responsibility to make employees feel safe. Don't be afraid to make that clear. MccConnell, who learnt English through Wishbone and played hockey because “that's what you do in Canada”, didn't want to stick out. She wanted to belong.

Video games about mental health don't have to be shoot-em-ups. Developer Kara Stone makes games like Medication Meditation and Cyclothemia to explore emotions in a way profit-motivated games don't. Feelings, which have been aligned with the femme, the racial, and the Mad, are only useful to developers if they make money. The binary of good and bad feelings is messed up, particularly how games punish you for having them. An example Stone gives is of an anxious moment in the game causing shaky hands, which you'll be penalized for; it's supposed to get rid of your feedback. Says a lot about how detached from your body games like these want you to be.
What to take away: The possibilities of affectiveness in games: making games that make you feel and are aware of the consequences of those feelings are important. Involving those from mental health communities are a way to make game development more open.

Elizabeth Ferrao
How Not to Lose Friends And Alienate People: Generating Physical And Language Awareness In The Workplace

Forget resumes, how chill are ya? Ferrao's interactive presentation had attendees stretching and talking with each other in activities that explored how physical confidence and word phrasing makes us people  others want to work with.
What to take away: Phrases like “yes and” or “tell me more” open opportunities, rather than shutting down people's creativity.

Hard Out Here For A Dyke: Being A Lesbian In Games

Even though it's been a queer year, it's not really been that great for everyone. Developer merritt kopas says umbrella terms disguise and obscure different experiences. So while it's good that we're seeing Gaymer Con and Concentricle, being vague makes it hard for variants to be visible. Lesbians are getting more playtime, but aren't the ones behind the games, earning less and with less access to success. “We need to make labour sexy,” kopas says. “Actual people are behind the work.” One way of supporting lesbian developers are incubators and organizations like Dames Making Games that invest in building skills of participants, which better the lives of real people.
What to take away: Gay life is being stolen by straight people and sold right back. Only one kind of sensibility can be valuable, as per the laws of Executive Pinkwashing *insert catchy non-political TD Bank-sponsored gay club anthem here*