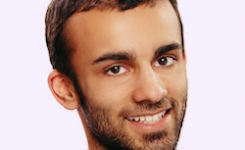 Aditya is an entrepreneur, investor, and engineer based in New York City. He studied statistics at Columbia and computer science at Cornell, and works on the Risk team at Stripe. When not defending users against online fraudsters, he spends his free time playing German-style board games and listening to embarrassing music.

Aditya organizes Identity Hackers, a group for LGBTQ+ engineers in New York. You can read more of his writing at adityamukerjee.net or on Twitter (@ChimeraCoder).

Portland, OR November 4, 2017
Decolonizing Unicode: Can We Type Every Word That Has Ever Been Written?

To make the web a fully open and accessible platform, we need to ensure that everyone can communicate online in their native language. However, there are a lot of technical challenges to supporting the entire world’s languages in written text. Unicode aspires to be the international standard for representing text digitally. Let’s look at some of the decisions that were made when designing Unicode, and some of the amusing quirks that they lead to, as we think of the best way to design digital writing systems that are truly universally accessible.

In *The Hitchhikers’s Guide to the Galaxy*, the Babel Fish is a universal translator. By allowing all beings to communicate regardless of language, it ‘neatly crosses the language divide between any species’.

Let's look at an example of a localized programming language: করো (*koro*), which localizes the Go programming language into Bengali, and see how this could be extended to other languages as well. We'll also talk about the steps to making open-source projects fully multilingual, so that developers who only speak English can collaborate seamlessly with developers who don’t speak English at all.