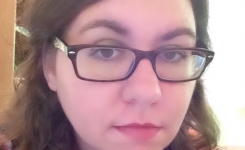 Alisha Karabinus is a PhD student at Purdue University studying rhetoric and composition, as well as the Managing Editor of Not Your Mama's Gamer, a site dedicated to critical examinations of gaming and gaming culture through a feminist lens. She holds an MFA in Creative Writing from Purdue, a BA in English from the University of Arkansas at Little Rock, and currently lives in West Lafayette, Indiana with her partner, children, and pets.

In this presentation we discuss advocacy writing and multimedia work done through the Not Your Mama’s Gamer’s blog, podcast, Twitter, and other social media platforms, and we do so via the specific (something) of the Invisibility Blues project, from inception through funding and the early stages of production and response.

We will look at the original series of posts on the history of racist imagery in animation and the upcoming video game, Cuphead, as a catalyst for a larger project that became Invisibility Blues, a video series that looks at race and racial representation in video games. The speakers will discuss how they conceived of the Kickstarter project that is ultimately funding the series, reactions to the Kickstarter and the videos themselves, and how they see the Invisibility Blues project affecting the games community directly and indirectly.

Ethical, advocacy-focused communication is essential in a world dominated by new media and social media, and with the particular intricacies of discussing and demonstrating issues in gaming, video is imperative to engage with a medium that is relies on interactivity. It makes available the kinds of writing and inquiry that were previously inaccessible to many, and that access is a necessary action that inspires further action. As academics, we are in a unique position to make our work relevant to the communities we serve through fighting for positive social change. Through NYMG we have done and continue to do this work, creating an organic nexus between the overlapping worlds of gaming and social advocacy.