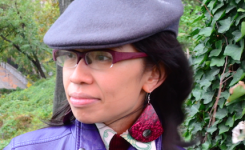 Arlene Ducao is big fan of Alterconf and a creative engineer who makes technologies that examine the relationship between the natural landscape, our built environments, and ourselves. She is a Principal at the DuKode Studio, a scientific and environmental design firm in Brooklyn, and the CEO and cofounder of Dukode's affiliate company DuKorp. At DuKorp, she developed her invention MindRider, the geospatial mind-mapping system profiled in WIRED, New York Times, Discovery Channel, MSNBC, Fast Company, Science Channel, and many more. A recipient of the South by Southwest Winburne Community Service Award for her work on satellite mapping in Indonesia, she teaches at NYU and MIT, where she presents a range of topics, from multidimensional data visualization to digital fabrication and its cultural underpinnings. She holds degrees from UMD, SVA, and MIT.

In the U.S., a country literally "built for white men," (Khadijah White, Rutgers) imperialism and colonialism cast a long shadow on the economic drivers of business and technology. Influenced by experiences of micro-discrimination at MIT Media Lab and my response in working on its Diversity Committee, I've started a long-term project to explore the imperialist shadow on U.S. startups and to consider if diversity is considered an inessential luxury in the tech economy. 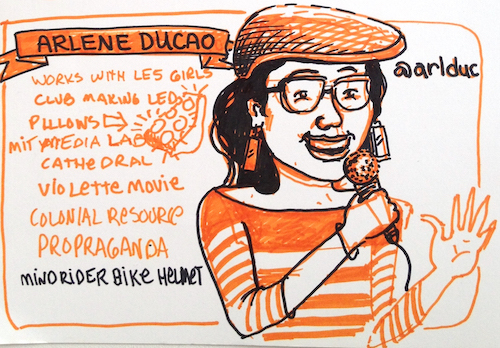 Sketchnotes of Arlene by Angela Wyman, printed with permission