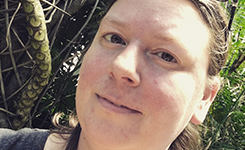 Audrey is a software developer, community organizer, and activist based in Portland, OR. She founded Calagator, an open source community calendaring service, and co-founded Open Source Bridge, an annual conference for open source citizens. She is the editor and publisher of The Recompiler, a magazine about technology and participation.

Portland, OR October 1, 2016
Unraveling the Masculinization of Technology
general discussion of patterns of discrimination and bias

At the beginning of the modern technological era, to be a computer was to be an actual literal woman—someone trained in math and computation. Decades later, women are desperately underrepresented in most technical pursuits, with an increasingly “leaky” pipeline leaving fewer and fewer women throughout our career progression. Not only are we excluded, but the contributions of past women are erased almost as soon as they happen. Women of color, queer women, trans women, and those on other axes of marginalization encounter this even more strongly.

Would it surprise you to discover that this isn’t an accident? Or that it isn’t merely a reflection of biases in society in general? I’ll talk about the ways that masculinity in tech has been constructed over time to create a more “elite”, higher paid, more homogenous workforce, and to sell technology to a highly targeted population. In the end, we’ll explore how to write a new narrative: one that includes everyone who desires to create better technology, without the gatekeeping and bias.