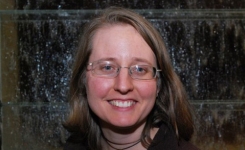 Emily Care Boss of Black and Green Games is an independent role playing game designer, publisher and game theorist from western Massachusetts. Author of Breaking the Ice,Shooting the Moon and Under my Skin, she was an active participant in The Forge forum (indie-rpgs.com) and is a member of the Jeepform Collective (jeepen.org). Emily edited the RPG = Role Playing Girl Zine and founded the small-press game convention JiffyCon (jiffycon.com). In addition to her solo design work, she is an occassional freelance contributor for games and fiction by Peregrine Press, Ginger Goat, Evil Hat Productions and others. You can find her games at blackgreengames.com.

Violence in games is big business, yet emotional situations closer to everyone's real life--falling in love, having sex, making a family--are scarcely represented in most video and tabletop role playing games. When present they often fall into hetero-normative, gender-scripted and discriminatory patterns. Join game designers Meguey Baker, Emily Care Boss and Lizzie Stark as they talk about their experiences running and designing games that embrace love and sex in inclusive and socially progressive narratives. From transformational larps dealing with the AIDS in gay communities in the 1980s to sex-positive tabletop role playing games, they share models that offer a wider look at the human experience. In their own work, Baker teaches sexuality health curricula, Boss wrote a trio of games with a romance theme, and Stark runs workshops on a Nordic technique created by Emma Wieslander called "Ars amandi" (http://www.ars-amandi.se), which allows players to platonically simulate sex in live action role playing games.