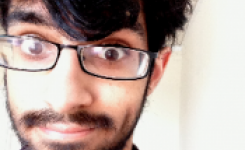 Izzy is a queer UX/Visual Designer and a multi-disciplinary artist in the fields of costume design, theater, and the circus arts. He grew up in a Pakistani-Muslim household, and found sanctuary in books, anime, and video games. He currently spends his time walking the tightwire, enjoying and creating interactive narratives, and theory-crafting and playing competitive video and boardgames.

My talk is inspired by Merritt Kopas's and Naomi Clark's talk on "Queerness and Beyond: Rethinking Human-Game Relations" at QGCon 2014, specifically on their section on Queer Mechanics. Queer mechanics exist in competitive games as dramatic outliers of the current metagame and exist as either direct functions, or rules, play styles, or mindsets within the realm of that specific game. My talk will begin with a short autobiography on my expertise in the field (Competitive gamer since age 12. Interaction Designer, and queer), and then move onto a focused analysis of a few competitive games that have Queer Mechanics in them. The games I will analyze will be the Smash Bros Series, League of Legends, and a game called Dawngate. I will talk about specific mechanics of the games, how they are queer, and how particular iterations had more or less of these mechanics and how it affects diversity of strategy selection. The end of the talk will highlight why queer mechanics are important, how they create game diversity and interest and allow anyone to find their own play style that they identify within the realm of the game.