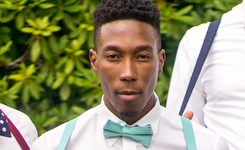 As a black software engineer, I often occupy spaces where I am one of a few - if not the only black person. There is often a visible look of relief after I broach the topic of race at work - that of “I can stop pretending to not notice that you are black.” Afterwards, people are more amenable to discussing “black” topics such as the latest Drake or Kanye album. However, discussions of race have a tendency to devolve into an anecdote trading contest. This, this talk will contend, can be alleviated by arming ourselves with empathy.

If we think of technology as means of production - economic, cultural and otherwise - it becomes crucial to include a multitude of voices and backgrounds in creating these tools and platforms. Hence, it is up to us - technology workers, to learn and teach the nuances of nurturing such inclusive environments. This talk will serve as an appeal for increased empathy from both people of color and white Americans when engaging in discussions of racism in America. With the recent media attention on the killing of unarmed black Americans, increased political awareness sparked by the Black Lives Matter movement, and a presidential campaign most notable for levels of vitriol unseen in modern politics, frustration and tension over the issue of race relations are incredibly high.

This talk will attempt to highlight select instances in media, pop-culture, and forums for technologists where the depiction of people of color is generally glossed over by the population at large, but may be problematic to people of color, though discussion of these issues are often relegated to discussions in safe spaces.

It will also seek to encourage guests to identify and avoid pitfalls common in cross-cultural discussions of race. This will include encouraging people of color to recall that, when engaging members of other races on the topic of race, we are often challenging their world view. Finally, I will go on to encourage non-colored guests that the most prevalent and exhausting forms of racism are not outright bigotry, but micro-aggressions.