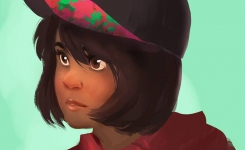 I'm an artist and art supervisor in Toronto - and I'm also adopted into a caucasian family which gave me privilege I'm well aware of but also caused friction for me in my childhood and a lot of ethnic dypshoria.

Toronto, ON July 11, 2015
Creating Characters based on Ethnic Dysphoria
Race, and themes regarding dysphoria.

Growing up in a caucasian family, being adopted from the Philippines, made for some very interesting internal artistic conflicts.
No one was very aware, but mentally I did not view myself as a person of colour and my character designs reflected that. They would either be a weird mishmash of every ethnicity I could think of (and still look white), or very prominently white.
What didn't help - and eventually became very cool for me - was Final Fantasy games where the characters were clearly supposed to be caucasian but looked like people of colour with lighter skin. Characters who reflected the same physical aspirations I put on myself and my designs.
It took over twenty years for me to come to terms with the fact that I'm not like my parents and that's totally fine and my designs reflect a greater diversity, and I still love Final Fantasy.