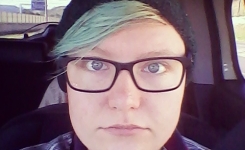 I identify as nonbinary, transgender and asexual (but usually just say "hella gay" when asked). I'm a recent graduate from UJ having studied my Honours degree in graphic design, where I wrote my research paper on the transgender character Cremisius Aclassi from Dragon Age: Inquisition. I want to go into game design in the future.

Cremisius Aclassi is arguably the first ever positive representation of a transgender character by a mainstream developer. How has he been portrayed by Bioware in contrast to previous portrayals of transgender characters in the history of AAA titles? What position of power and privilege has he been given based on the Dragon Age universe's intersecting systems of class, race and religion? How does this compare to the positioning of the other main characters in the game? What does the conscious decision to position a trans man within the game's world in such a way mean for the future of trans representation in mainstream gaming?