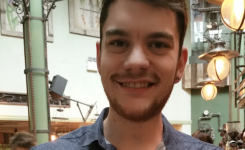 During my time in the industry and in education I have worked hard to develop projects independently and in teams with peers from various other creative disciplines, most recently of which developing my own game, To-Tum, outside of work as part of my own company, Insert Imagination. To-Tum is a 3D spatial puzzle game for mobile devices in which players must navigate a ball around a maze of pipes, where they will discover the beautiful audio-visual world of To-Tum.

I currently work at Tag Games Ltd. Dundee where I have had the opportunity to work on a commercial project for a client within a small team, developing Downton Abbey: Mysteries of the Manor, a 2D Free to Play Hidden Object Game game, and Angry Birds Action! A 3D pinball game. In addition to this I have also been working for the last six months on various commercial Unity3D projects, developing gameplay features, visual effects, gameplay systems and features across several projects.

As a LGBT member of the games industry in Dundee, Scotland, I feel that sharing my experience in the Scottish/UK industry is crucial for other potential members of the community. I had very few local role models in the industry that represented minorities, so I believe it is hugely important for more LGBT role models represented in games academia and from British game development studios.

As an Gay man in the Scottish game development community I felt like there was no community, I went through my university career not knowing if there would be a place for me within a studio.

Over the short period of time I have worked in Industry I found that the game development LGBT+ community is very disperse, although it was a great that it exists in various forms, after attending other talks and events surrounding LGBT+ issues in games it became quite clear and the focus of discussion within these communities was being very skewed towards local issues.

So after dwelling on this I decided to create a more local/focused community, somewhere that we can safely discuss anything we want, wether that be games, issues, dev, community, anything! The goal being to allow the Scottish LGBT+ Game Dev community to have a voice in the sea of game development communities.