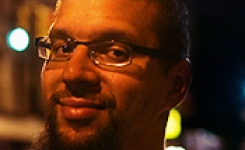 Shawn Alexander Allen is a game designer, artist and writer, born and raised in New York City. He is currently working on Treachery in Beatdown City, a game that is as subversive of the fighting and RPG genres as it is of gentrification, nationalism, racial stereotyping, and the war on terror. TiBC is the first game being published by his company NuChallenger which he hopes to grow into a creative space to give those with underrepresented voices a place to make games. Previously Shawn worked for almost 5 years in AAA games, the first game he shipped having sold over 25 million copies. Despite that he’s more proud of TiBC and other personal group projects.

Crowdfunding sites like Kickstarter have been a big boon to allowing creators who wanted to work around the publisher system to get projects off the ground. We have seen the resurgence of old, beloved and once dormant series', and the return to creating games in genres that were long thought dead. But there was a problem initially that even in this new space, there was a lack of ethnic, racial and gender diversity in the makeup of creators and the protagonists of a large swath of games that were funded. In the last year, however, several key projects have been funded on Kickstarter that have shown that Kickstarter can really be a path toward helping diverse voices get their projects made. From fan favorites like Shantae, to the unknown Catacomb Kids and the recent new project Sunset by renowned developer Tale of Tales, this talk will analyze a few projects that have helped push the needle and shown that under represented voices can find success in the crowdfunding sphere and why that is so valuable. 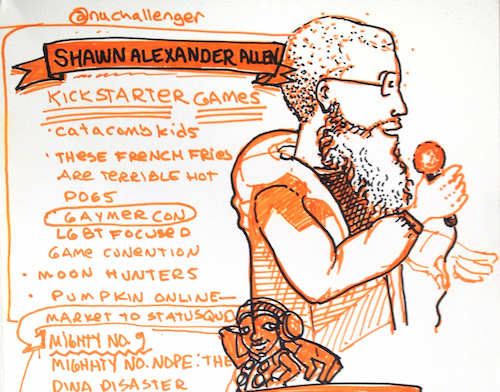 Sketchnotes of Shawn by Angela Wyman, printed with permission