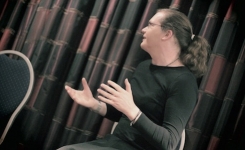 twitter
Anna was going to be a programmer when she grew up, but she tripped and fell and became a networker. She's spent her career working for the research & education network in Ireland, including being a co-chair at RIPE and participating in the GÉANT project.
Dublin, Ireland August 6, 2016
How LGBT peoples' lives have been changed by the Internet
Mentions of It Gets Better project, which could involve a cautious mention of suicide.

We know that LGBT peoples' lives have changed, but the role of the Internet in that is complicated, and still changing. I'm a trans woman who's worked on the plumbing side of the Internet since the 1990s (it's way more interesting than it sounds) and for years I thought that there wasn't much I could do to help this. But when I looked closer – and especially when I went through transition – I realised that this wasn't the case. Comparing pre-Internet support and activism with the 2015 Marriage Referendum, this talk looks at different ways that the Internet has changed things for the LGBT community. Then, knowing the effects that we might not realise we've had, it asks: what do we need to do to make sure we make things better for people in future, not worse?