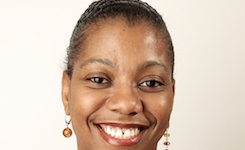 She is a native New Yorker playing video games, designing BBS boards and gopher sites prior to the Web going world wide. As an early adopter and one of the few women of color web designers in the early 90's, She's been involved with tech and social networks for over 30 years.

Shireen is a serial founder. Digital Sisters/Sistas Inc. is the first organization to focus on women and girls of color in tech and online access. She created the first women of color web multimedia management firm (MHG). Some recent projects are Tech Media Swirl and Stopping Online Violence Against Women.

In some of her more interesting roles she was the manager for PoliticallyBlack.com a site that was sold to Netivation and ended at Politico.com. She created the game TechnoDemic, a multimedia competition to help youth learn technology and programming terms.

Shireen has helped to organize various tech events around the country and/or on planning committees including the Digital Community, Techno Rodeo, Feminism 2.0, She's Geeky DC, Geeky Girls Night Out, Nonprofit 2.0, Computers, Freedom and Privacy, Gov20 Expo, and others.

As an author she's written “Gaining Daily Access to Science and Technology” in the book “50 Ways to Improve Women’s Lives” and “Access to Technology: Race, Gender, and Class Bias.”

Shireen has been named one of the Fast Company's The Most Influential Women in Technology, DC Tech Titan, DC's Top Ten most influential in Social Media, The Root 100: African-American Leaders of Excellence and GovFresh's 100+ Women in Government & Tech. I've been awarded the Social Citizen: Apps for Democracy DC, Rising Star: Woman of Color in Technology, and Heroine in Tech.

Washington D.C. January 30, 2016
Is it Possible for a safer, saner, and diverse internet?
harassment, threats of violence will be discussed.

Over 70% of women use social media, 40% in gaming, but only 30% in tech. Many use these as outlets to speak out against stereotypes and narratives that have implicit biases. Others just have an opinion but as an opinionated woman, she is not just harassed but is threatened with rape, violence & death threats. If that woman happens to be a woman of color she gets the combination of all of the above with an addition of racial hate & threats. Many of us have experienced the unpleasant reality of being a woman who speaks freely on the Internet. So what can be done? Shireen Mitchell will have an intriguing & insightful discussion on this issue during this session.