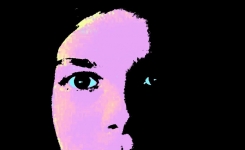 Minneapolis, MN April 9, 2016
Liar Liar Pants on Fire: Being a Kid in the Tech World

Until recently, I was breaking the law simply because of my age.

According to our government, people under 13 are irresponsible and can’t be trusted to freely express themselves. According to our government, people under 13 can’t be trusted to be people. I, however, have always felt strongly that while I’m not a teen, I’m still a person. And as a person, I believe that I should be free to express myself and learn.

Instead of trying to muster up a grain of care and actually teach us anything about the issue, lawmakers decided that we should just be prohibited from using the internet. Abstinence only education doesn’t work for sex education, and it won’t work for internet safety.

In this talk, I’m going to discuss the consequences of COPPA and its effect on me. I will explain how the media portrays us and how that portrayal hurts us.

If we’re not treated like we can contribute, how are we supposed to be contributing members of society when we grow up?

I feel like this talk is for everyone because it is important for everyone to understand that we’re not just kids.