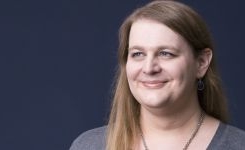 Sarah Withee is a polyglot software engineer, public speaker, teacher and mentor, and hardware and robot tinkerer located in Kansas City, MO. She has a passion for technology, and has ever since she wrote her first computer programs in elementary school. She captivates audiences with both popular and powerful technical and anecdotal talks. She gives workshops to teach programming and hardware building to women in tech, as well as to students of all ages. She's mentored middle and high school robotics teams to world championships. She's even helped organize four conferences, been on a Google Year in Search video, and started the viral hashtag #SpeakerConfessions.

She passionately tries to connect with people and communities, both online and offline, and encourage and support new people going in tech. She even started a podcast to try to help boost underrepresented groups in tech.

Major tech cities are full of developers. It makes sense. The tech companies are all over. But what about the developers located in other cities? Smaller cities? Cities that don’t have the recognition that the other major cities do?

I will speak on some of the difficulties I have had as a developer born, raised, and living in the Midwest. I’ll talk about some experiences I’ve had with other developers from the coasts as well as assumptions I see made about us. I’ll also talk about what I think we can do to be more inclusive of Midwest developers and not apply some of the biases towards them.