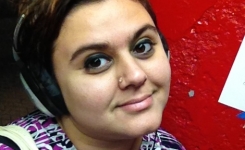 Khadeja Merenkov is a graduate of the Intercultural Relations program at Lesley University. Being of mixed cultures herself and having lived in numerous countries around the world (Saudi Arabia, Mauritius, and the United States to name a few), she feels the need to advocate for more representation in the world of video games - a love and passion since she was a little girl. Besides being active online and in person within activism communities, she is also a professional voice actor who can be heard in Codename Cygnus as well as Children of Liberty.

Boston, MA September 15, 2014
Perceptions and Realities of the Indie Demographic - and How it Affects our Games

To complete her Intercultural Relations Master's program, Khadeja Merenkov did an ethnographic study of the indie game developer community in the Boston area. One of the issues she saw within the group was a lack of diversity - a sea of white men met her at every event and studio. What became apparent as well was a worry about a lack of originality within the community. Soon, she figured out that the indies may benefit by looking at both issues as two sides of the game development coin. Using her experience as an Interculturalist, international citizen, and writer, Khadeja's talk will include an analysis of how diverse teams will change game creation - and keep alive the innovation indies are known for.

Got lost on my way to AlterConf but I'm here now and it is super crowded yet also SO quiet and respectful while @khakhov presents. Very cool

“There’s a lot of talk from Indies saying they want more diversity, but they don’t understand what it means to be inclusive.” @khakhov

On feeling different: "People of color are not repeat attendees. I see them once, and I don't see them again." @khakhov #alterconf

"I truly believe that Indies have a good spirit." (Paraphrasing from memory.) @khakhov at #alterconf Must check out her study, Indieology.