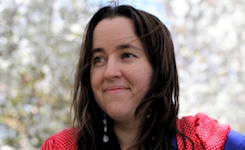 Shauna Gordon-McKeon develops both code and community.  Her work promotes openness and inclusiveness in software, science, medicine and government.

Whether it's at the dinner table, on social media, or in the office break room, many of us like to talk about controversial topics.  Yet all too often, these debates go badly -- and not just when participants have clashing beliefs and values.  What's going on?  We'll go over a variety of dynamics that can poison conversation, including interruptions, topic control, tone policing, and more.  This talk goes beyond explaining why these behaviors are harmful and talks about how to address them when you observe them in others - or in yourself.

Arrived at @alterconf just in time for @shauna_gm's session on communication strategies to reduce harm (given/received) in discussions.

check it @samn took a pic of one of @AlterConf Boston’s best slides http://t.co/69tGR5hT7N p.s. #AlterConf was cool

@shauna_gm I enjoyed your #alterconf talk: never heard of "progressive stack" before. Also, thought you might enjoy http://t.co/aIArGLplQE

“There’s this believed truth that arguing is the road to truth.” @shauna_gm #AlterConf pic.twitter.com/ZAqUl47CDV

"The devil's advocate was [historically] invited, part of the community, and very well researched" — @shauna_gm at #alterconf

"Talking the Talk: Communication Styles for Diversity at #AlterConf" my writeup of @shauna_gm's talk. https://t.co/rscFiogyjx