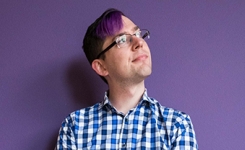 Bryan Hughes is a queer technical evangelist at Microsoft, a former member of the Node.js Technical Steering Committee (https://github.com/nodejs/TSC), and former chairperson of the Node.js Community Committee (https://github.com/nodejs/community-committee). Bryan is also the creator of Raspi IO (https://github.com/nebrius/raspi-io/), a Raspberry Pi plugin for the Johnny-Five JavaScript robotics library (http://johnny-five.io). Outside of tech, Bryan is an amateur photographer (http://500px.com/nebrius), occasional writer (https://medium.com/@nebrius), a once upon a time pianist, an active member of the LGBTQ in Tech slack, and a wine aficionado.

San Francisco, CA December 10, 2017
Why Open Source Fails to Protect Under-Represented Minorities
Online harassment and trolling, sexism, burnout, suicide
I joined the Node.js project with the intention of improving culture in 2015 along with several other individuals, and I eventually became one of the top leaders of the project. Two years later I resigned in protest over the rest of leadership's unwillingness to enforce our own CoC (code of conduct) against a problematic leader. In this talk, I will tell the story of social justice work in the project, the barriers we faced, how we overcame some of them, and the cost many people paid trying to make things better. Specifically, I will detail how and why the rest of leadership failed to understand the issues, and how that translated to their implicit refusal to protect those that needed protection the most.