When I heard that AlterConf was moving to the Color Communication Badge system, I was pretty impressed. So far, I’ve only been to one other conference, Wiscon, that uses color communication badges, and my first day attending was a relief compared to my other social experiences at cons.

The premise for the badge system, which for Alterconf is being unveiled in Seattle, is simple. Each attendee receives three cards included with their name badge and holder. (Attendees are invited to include their pronouns on their white name badge.) The colored cards can be slipped behind the name badge in the holder so they’re visible to other attendees. A green card with a triangle means that the wearer wants people to come up and talk to them. Yellow, with a circle, means they want only people they know to approach them, and red, with a square, means that they want to be left alone. In each case, the person wearing the badge may still approach people they want to talk to, but if someone is wearing a yellow or red badge, they generally want to keep being approached to a minimum.

I say that this system was a relief to me because, as someone on the autism spectrum, I sometimes have issues voicing my needs and reading other peoples’ social cues. The badges were designed for use by people with autism at conferences and gatherings, but they’re a good tool for all con-goers. At Wiscon, a science fiction and fantasy literature conference I’ve attended for the past few years, where a large number of attendees have adopted the badges, all of the guesswork that stresses me out when navigating the crowds of other con-goers evaporates. Just by having the system, I also feel more secure for advocating for my needs and bowing out of conversations as a form of self-care.

As a child, I was usually a silent observer of conversations, and as an adult, I have a hard time matching social cues to social convention. I default into observer mode and often have no idea how to join a discussion. I also have a hard time saying no to people who approach me during gatherings, and I often feel like I have no way out when a discussion starts to drag on. My social anxiety peaks. When this process continues for hours with multiple people, I find myself tense and exhausted at the end of the day, my ability to function drained away.

Yellow and red badges take away the social pressure I feel to talk to everyone I see and to talk to people I don’t want to. No system is perfect, people do sometimes go up to red or yellow badgers and try to strike up a conversation, but it’s much easier for me to point to the badge and explain that I’m tired or in a hurry, especially when other people who aren’t on the spectrum are wearing the badges. I don’t feel singled out. I don’t feel different.

I also appreciate the badges because, when everyone is wearing them, I feel less awkward approaching other people for conversation. As someone who has a hard time with social cues, I often default to assuming that people don’t want to be approached. When faced with a room full of what, to me, can seem like blank slates, figuring out who might want to talk to me takes up a lot of mental energy. But, if all of the people who do want to make new friends or professional connections are wearing a green badge, I no longer have to worry.

Conferences are often high-pressure events, especially tech conferences. The emphasis is to always be hustling and making connections. People are running for long periods of time on little sleep and a break from their usual routines. It’s easy to get sucked into after hours parties, bar cons, and lobby cons until the early morning. The color badge system works, and not just for people on the spectrum.

At Collision in New Orleans last year, an investor was at a party, enjoying drinks with friends, when she admitted that she often hides her investor-designated badge when she has to walk across a conference floor because she is inundated with pitches. At gaming conferences I’ve been to, I’ve seen emotions run high and people have to leave the gaming floor to cool off and get some space. It would be so much more convenient if more cons used a visual system to communicate to people to give them space.

People at conferences get tired and hangry and sometimes just want to be left alone. Some people are naturally shy or quiet and want an easy way to communicate they’re looking for someone to talk to. While the Color Communication Badge system was created for people on the autism spectrum, everyone benefits from its implementation at conferences and large networking events. It just makes connecting with other attendees easier. 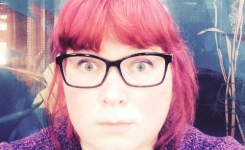 site
W. L. Bolm is a techie and writer living in Wisconsin. They work as Director of Support and Nonprofit Advocacy at CommitChange. Their writing has appeared in The Tampa Tribune, the St. Petersburg Times, I Need Diverse Games, and in a number of print and online publications.